Following our post on Instagram the other week of a picture of myself, Angela from Polly Allsorts and Karen from Minnie Muse.  I would like to follow up with a blog about more of what happened and that eye-opening experiences we had. 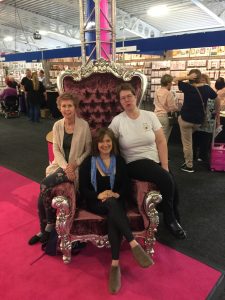 Back in May 2016 I met the two ladies at an event for crafting businesses.  We were all very new with our own businesses and hoping to expand them.  Angela had been on Hochanda TV with her fairy houses.

As all three of us were very new to showing and attending events it was obvious this was the next stage. We were all online, in our business and wanted to increase eyes on them.  As Angela had been on Hochanda they where doing an event in Kent so we decided we needed to see what it was all about.

After we attended the event, we were all chatting and decided that we could help Angela during the weekend of the show and help her the best we could.

As I only live 5 miles away from Angela, I remember spending many an afternoon in her living room, with the sofa and chairs to the edge of that room marking out the space.  So we could work out what and where stock was going to be on the weekend.

Angela had lots of ideas and she had a lovely old kitchen dresser to display her pre-made houses.  There was also a make and take table so this is where Angela and Karen were in the element.  Myself I’m a very practical hands-on person so I was looking at more of the display.  This is through the many years of working in retail, from shoe shops to Pets at Home and eventually Co -op.

One of the major problems we came across was how much stock and of what product to take.

When the day arrived, we were ready to load the van. This end was great, as Angela’s children helped out.  So they was about six of us to loading the van, we eventually got on the road an hour late than planned, but arrived early afternoon where we met Karen.  Luckily Karen only lives 40 minutes down the road from the event so we were tired after our 2 hour drive, but it was all action go once we arrived as we needed to get set up. We had four hours.  As we had planned it out, it did work out well.

Saturday was fun we all did our own thing, Angela was very nervous meeting her public, she did very well.  Karen was great, she organized the make and take table, where she had a few people making Items which they enjoyed.  While I looked after the restocking and re-packing of items that had been sold. We also had our friend Kathryn helping us out on the day. 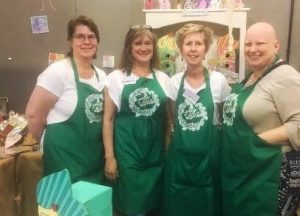 Angela had also organized having a workshop so out the back there was a table of nine seats which was something I was in charge of making sure that they had their mats, paint brushes there was plenty of paint and embellishments and all sorts of things for those who attended the workshop.

I was the lucky one as because I was able to wander round a little bit more than the other two, as they were full on and as anyone who knows me, unfortunately paint to me is what you put on walls.

The next day was quite good as Angela’s son and a mate came up and helped. They were in front of the stand and both where chatting to all the ladies and guiding them towards the stand.  The makes and takes table was very busy that day.

Then the show was all over and we had to take everything down, we loaded the van and said our goodbyes to Karen and headed home.  I must admit it took me about a week to recover from the event as it was full on from the moment I arrived at Angela’s, to the moment I got home after the few days. It was good not to move.

It was a great experience for us all. I must admit I certainly plan a lot more and try not to take too much excess stock for events.

Over the years and different events, the ones I have attended, I’m feel Im getting the hang of what sells at each particular type of event. But it is always a guessing game. So, when we get back to some sort of normal later in 2021, I’m not sure what we shall really need to stock, as so many have not been able to get to a local quilting or sewing shop during the last 8 months. But the best seller during the last lockdown is  needle threaders.

If you are part of a group or organising a local event weather it is quilting, embroidery, or other type of crafting and would like a trader with a bt of a difference attend then please email us with details. We loe to support quilting area meetings as we find we every one still need a needles or two.

Seahorse Quilting is at present only open to offer Click and collect if you’re local. The website is available for though who cannot collect.

We can’t wait to be able to allow customers back into the shop to purchase Fabric, Wadding, Thread and of course LaceyMays Haberdashery corner.

Seahorse Quilting is offering Click and Collect. Please ring with either Fabric or Haberdashery items and your phone number. You shall be call with the next day we are offering the service and book you in for a time to come and purchase and collect your items. We have a mobile card machine at the front door or can still accept cash.

LaceyMays Haberdashery is within Seahorse Quilting

You can message us through our email

You have Successfully Subscribed!

We are back to daily dispatching on working days at 10 am. Please note we only dispatch to UK addresses. Dismiss